In the climate of a tough job market, graduate students are encouraged to publish more and earlier. One hears publication pressure stories from friends, colleagues, and reads on the Chronicle of Higher Education. They are staying in graduate school longer to maximize the number of publications before going on to the job market. Everyone tells you that publications are the key to the job.

However, the saying “publish or perish” in academia does not show what it takes to be a prolific researcher. In order to answer that question, I look to another field, namely creative writing, for inspiration. Viet Thanh Nguyen, a scholar and a Pulitzer prize winner, in an Op-Ed on the LATimes, entitled “In praise of doubt and uselessness” intimates his struggle as an early scholar, and an aspiring writer. The essence of his struggle is to walk a balance between being critical as a scholar, and being creative as a writer. He praises “slow thinking”  which would eventually lead to higher productivity as scholar and writer. The article got me thinking about two sides of the same coin of being prolific scholar/writer. My biggest take-away is that the two aspects: CRITICALITY and CREATIVITY are intertwined all the time in one’s intellectual development.

In a grant writing workshop, one of the senior students in my program commented that in graduate students’ training, we learn how to be critical first, then learn how to be creative later. This comment keeps coming back to me when I hear that students are encouraged to publish more now. If the goal is to publish more, it means that one should pay more attention to creativity, and that creativity should be encouraged, and valued more. In other words, there is a mismatch between what the labor market tells students, and what the graduate program is typically structured. The model of training students to be critical first, and be creative later has become obsolete in the highly competitive academic market. I would argue that in order for graduate students to get more out of their graduate training, they should be encouraged to be creative from day one. In order to make the case for encouraging creativity, I delineate scholarly productivity into two constitutive elements: criticality and creativity. I assume that productivity is a sum of criticality and creativity, whose slopes and whose graphs might not complement each other, rather they could hinder each other at points. My hypothesis could be captured by the following function:

Why criticality? As my friend stated, students are trained to be critical first, and then creative later. As a new student to professional sociology, one is supposed to learn the various aspects of the field. This is the foundation building phase. During this time, students often accumulate preexisting knowledge, and think critically about extant theories, research designs, and findings. In other words, one is in the process of becoming a critical consumer of knowledge. Many people have learned what it takes to become a critical consumer of knowledge even before graduate school. They accumulate these skills during their secondary school, college, and even master’s programs. In other words, one’s criticality at a graduate school level  does not really start at point 0. In graduate school, the more one reads, and engages with the texts, and conversation with other scholars, one becomes more critical. The following graph demonstrates how one’s criticality grows during the training period. 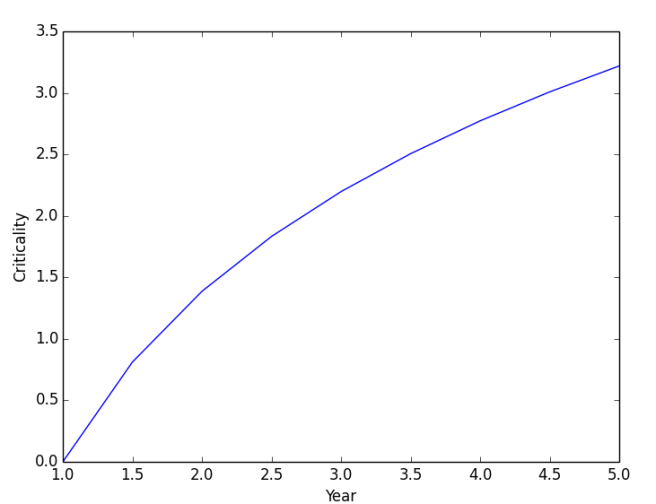 The horizontal axis shows the number of years in graduate school, and the criticality is measured by papers published. It is reasonable to assume that a first year student has not published any critical review of literature yet. Therefore they all start at point 0.

But criticality is not the only element that one cultivates during one’s graduate school training. Assuming that one is very good at this aspect, maybe one could write very good literature reviews, book reviews, or close reading of the existing texts or research. However, this aspect doesn’t totally guarantee the originality of one’s scholarly outputs. How many graduate students only write book reviews and critical reviews of literature in a given field? How many scholars have become important in their fields because they have written very critical, and well-informed reviews of literature? Possibly very few. That said, one needs to acquire more than just critical skills in one’s graduate career.

The above graph shows the kind of function of creativity of a graduate student that I have in mind. I assume that at the beginning as graduate students especially in social sciences get to know the field, they are not scientifically creative yet because they have not acquired enough knowledge, tools, and haven’t learned the tricks of the trade. If left to himself/herself, the graduate student would take a few years to figure out how to produce the first paper. Somewhere between year 3 to year 4 would be a reasonable time period when they produce the first researched paper of publishable quality. My assumption is that creativity is a convex function because after one figures out how to write the first couple of papers, one would be able to produce more in term of quantity, and in a more efficient fashion. As creative writers often say: “ideas beget ideas.” The first few original ideas are the most crucial ones because they get the creative engine started. After a point, the number of papers (output) would grows very fast, because one is already familiar with the knowledge production process.

When bringing the two elements together,  one would get a graph like the following, with productivity to be measured as a function of creativity and criticality. Theoretically, because the two creativity and criticality functions have different shapes: one is convex, and the other concave; the sum of them would be a function whose slope is a lot less steep. It looks more like following:

The slope of this graph is positive, which shows that the more time one spends in one’s graduate program, the more productive one becomes. However, the productivity function does not rise as fast as the other two, as the absolute value of its slope is smaller than that of the other two. I would argue because graduate students currently are trained to be critical before they are encouraged to be creative, their criticality hinders their creativity, and the original ideas that they could potentially come up with. Sometimes being ignorant of what has already been produced in the field gives one more room to explore ideas. Ultimately, as a graduate student, one ought to walk a fine balance between the two elements.

In the book The Professor is in, Karen Kelsky argues that the first paper is the most important  in one’s scholarly development. She even calls it the “power of one.” In other words, her conception of a graduate student’s scholarly productivity looks more like the following graph:

As stated above, a graduate student in social sciences in general publishes their first solo-author paper between their third year and fourth year. In the highly competitive academic job market as what a Chronicle of Higher Education article shows, students are encouraged to publish paper as early, and as many as possible. That means, the point at which they start to publish has been pushed to the left on the horizontal axis. Students have to start to publish at day one. Sometimes they come in with publications already.

Above is a linear common story of how a graduate student could navigate their scholarly development. I have delineated one’s productivity into two elements: creativity and criticality. What is missing in the picture is the advisor who plays an important role in one’s academic well beings as a scholar in training. In an ideal world, the advisor could help ease the student out of the publication process. The ideal invention is to flatten the steep slope of the creativity curve through helping the student to turn a nascent idea into a publication. In this way, the advisor and the student implicitly agree that they value creativity more than criticality in the early stage. If the advisor and the student agree that the student must accumulate a certain amount of knowledge before the student can enter any knowledge-producing project, then they follow the old training model. If the professor helps the student all along the way by coauthoring with the student at every point during her graduate education, then the resulting productivity function would have a steeper slope because she can produce more.

With all possible combinations of creativity and criticality considered, I argue that as students enter graduate school, the program should inform them what productivity model they prefer their students to follow. Does the program emphasize a lot of productivity? Does the program train a diverse body of students, who want jobs both within and outside of academia? Again graduate students come in with certain critical skills already, which they got from their previous training. However, in order for them to be able to become a producer of knowledge, they should know from day one that their creativity is very important as well.

Back to Viet Thanh Nguyen’s thesis that it’s a struggle to balance being a creative writer, and being a rigorous scholar. I agree that each identity emphasizes different skills, but both encourage originality and knowledge production. Therefore, the scholar should also be creative, and learn to be creative from day one in their training as any creative writer would.

Acknowledgements: I would like to thank Dipendra Misra for having spent significant time discussing different productivity models with me, and for providing all the graphs. All graphs were created using Python.