My book of the month goes to Working for Respect: Community and Conflict at Walmart by Adam Reich and Peter Bearman, published by Columbia University. 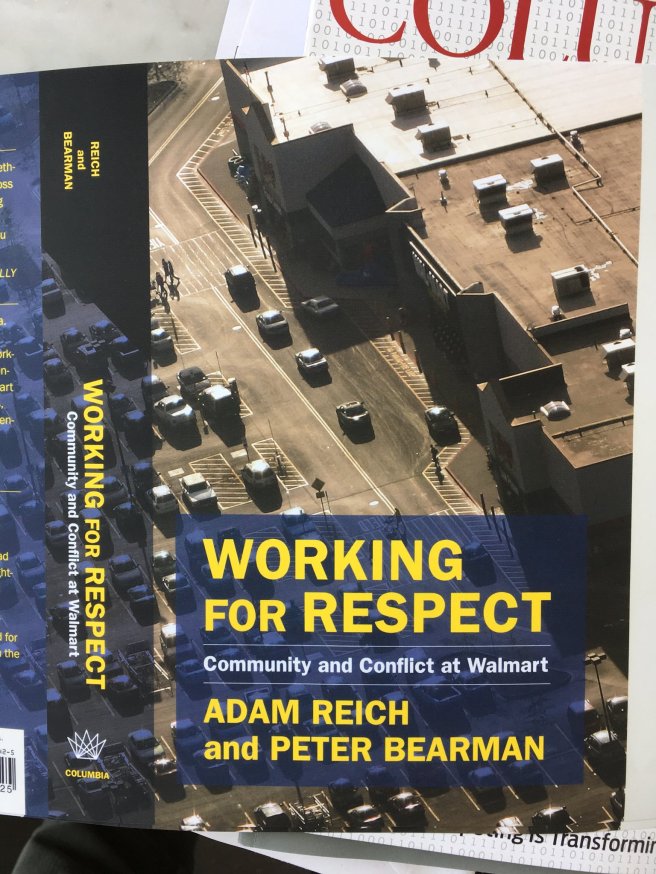 Why is it worth a read?

Because  it’s about Wal-mart, the largest private employer on earth. Worldwide it employs around 2.1 million people. Its workforce is larger than many countries. The book looks at how typical workers experience their job at different Wal-mart’s, how and why they organize or fail to organize. In a lot of ways, it is a typical labor story where the protagonists are low-wage workers whose contribution to the development of the organization is not materialized in their economic gain, i.e. living wage. The antagonist is of course the evil corporation. However, the authors show that most workers do not hate it, and find it to be a good place to work. What is really innovative about this book is its many interesting methods. They range from student-led interviews, ethnographic observation, and even student-led labor movement recruitment, to big data, social network analysis, and also cognitive social science. Using students (mostly undergraduate students) as researchers is not new. Peter Bearman did it before in Doormen, which is also an important read for those who are interested in studying inequality, and labor. Among all of the methods, I find big data, and cognitive social science to be the most interesting. For the former, they use a large amount of texts written by Wal-mart associates to show their attitudes toward their employer. For the latter, using brain scan, they shows how student researchers changed their internal understanding, and feelings about social justice, and social relations before and after their brief time employed as researchers. At the end,  the authors conclude that social ties matter more than social framing when it comes to mobilizing people for social change. In other words, social relationship is more effective in making you stand up for social injustice, than reading/listening about it on a discursive level. Finally, the best thing about the book is that it reads like a summer story. I really appreciate how much the authors try to make it read well, and that one can enjoy the book rather than laboring through it like other academic books. All in all, it is definitely worth a read, particularly for anyone who is interested in labor movement, work, organizations, or social network.