Every April, Agnes Scott College, my alma mater, organizes its famous annual writer festival. I got introduced to it my first year, took a creative writing workshop in my second year. Danzy Senna, a mixed race novelist, whose main themes deal with growing up as a mixed race person in American race-conscious society, showed me how one can write to provoke sensory experiences, regardless of whether those experiences are relatable to an English speaking audience. She urged me to include foreign languages: Vietnamese, Khmer. “Transport your audience to another world,” suggested Danzy. I benefited from Agnes Scott’s tradition of bringing great writers in to show students how to be a good writer. But it seemed no Asian writer was ever invited to give a workshop on writing. That changed in my last two months of college.

In early April, 2013, Gish Jen, gave a powerful public lecture on how she became a writer by dropping out of a business school. Additionally, there must be someone to break the stereotype that Asians do not become writers because writers dont earn money. Pursuing your passion was essentially the message.

During her speech, Gish Jen told us where her inspirations come from. Particularly, how to organize ideas, and develop a story out of an idea. The method is to keep a binder of words, phrases, sometimes quotes, and sayings. Then at a later date, sift through them, pick one good idea, and develop a story from that word. We’re all wordsmiths.

The image that stuck with me particularly was her description of tall ancient pine trees at Confucius Temple in Qufu, China. A month after her speech, I bought a one way ticket to China, and spent the summer there. Without any real meaningful connection to China.  I did have a few Chinese friends in college. One of my cousin studied abroad in Chengdu, Sichuan. Yet I knew not much about the place, nor I knew any Chinese word then. It was a bold decision. Two months later, volunteering at the Confucius Temple Complex, standing in front of rows of “ancient pine trees,” I felt accomplished. The trees were not really ancient and mysterious like those in Avatar.  They were well-kept, had more trunks and barks than leaves. Standing in the temple yard, I tried to absorb all the wisdom of time, air, water, and soil of the place. It felt sacred. “I have arrived,” I mumbled to myself while collecting soda cans thrown on the sidewalks by tourists. This experience showed me how imagination could influence me, it urged me to act, albeit on trivial matter such as traveling to another country. Gish Jen was persuasive in her argument that one ought to experience the place before really trying to describe it in own’s writing. Besides, I can relate to everything she told us that day. She had power of a great novelist. I could relate to her words, to her kinship stories, which spanned both the United States and China. At the end of the summer, I felt happy traveling in China, and seeing it partly through Gish Jen’s eyes, partly through my own curiosity.

The title of the blog post is “why should anyone read novels?” Reading novels is a luxury for many. In the age of “info glut,” few people have enough time to sit down, and read a novel from cover to cover. How many have patience to read Anna Karenina, a tome of almost 1000 pages? Yet “reading novels” is the advice that I constantly got since the first day in graduate school. “If you want to talk like a normal person, read novels instead of academic articles or books,” said one friend. “If you want to write well, learn it from good writers. Academics don’t make good writers,” advised my writing professor.

One suggested me to read works of fiction so I can talk like a normal person rather than like an academic. The other suggested me to read good novels to learn how to write well. There are two problems here. First, why academics get such a bad rap? Their writings are dry, full of jargon, and don’t mean much to lay readers. Second, why reading fictions is worthwhile for anyone who wants to write and read well? I will attempt to answer the second question. The first question will be dealt with in another blog post that focuses on something I call “academic habitus.”

So why reading novels? Because of good sentences, and more importantly  because of images that are embedded in each book. Recently I watched some videos in a Coursera course on creative writing. The teacher explained what makes good writing with a pyramid of elements. 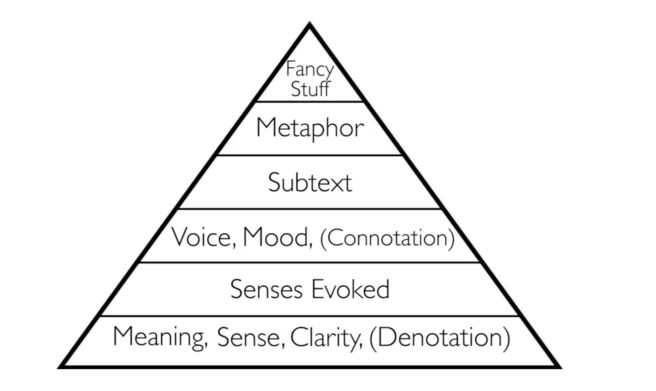 Any good writing would have all the layers. Occupying the bottom level are meaning, sense, clarity. In other words, sentences must make sense. At the second level, it’s about evoking sensory experiences that everyone has. I would argue that these senses are culturally conditioned. In other words, some senses make more sense to some readers than others. For example, bacon smell would mean a lot to my American friends than to my mother who came of age in a village in North Vietnam during the Vietnam War. Following these raw senses are voice, mood, and connotation. This is where the writer’s personality comes out, and where the reader remembers them as a writer. Then the last three layers deal with subtext, metaphor, and fancy stuff. I would also argue that these parts are culturally dependent, and they are the parts that distinguish ingenious works of fiction from basic good writings.

Almost always, good social science writers operate on the first three levels. They prioritize most on the first level. Sometimes they don’t even make sense. That means they are down on the basement of the pyramid: using esoteric, vague language. Yet if one looks closely enough, one would encounter good writings that cover all three levels. A few examples are Sidewalk by Mitch Duneier, Dealing in Desire by Kimberly Hoang, and Evicted by Matthew Desmond. Most good ethnographies are worth reading. The authors write with novel-quality in mind. However, social scientists almost always stay away from the top three levels of the pyramid. The boundary between the third and fourth level demarcates where a novelist begins, and where just common good writers end. Social scientists stay away from the meaning making project that novelists actively engage in. We want to analyze metaphors instead of creating new metaphors, and new literary associations. The subtext should be out of the door because it invokes speculation, and we’re not in a speculating business.

Now back to Gish Jen. She’s so good at evoking senses by just describing a few old pine trees. Her voice was strong because she made the experience personal: telling all stories from the first person point of view. The subtext? Metaphor? And fancy stuff I wasn’t sure about any of them. Yet I knew for sure that her writing urged me to imagine, and to act upon my imagination. My sensory experiences are evoked enough that I could not sit in Atlanta any more. I wanted to get in touch with my feelings by going to Asia. That’s it. Reading good works of fiction let one be in touch with one’s inner feelings, and emotions. That is why everyone should read them. We have suppress them enough in the modern world in order to be a good student, an efficient worker, and a strict parent. We barely explore what our feelings are. We manage our anger. We refrain from showing our raw feelings lest other people judge. This is why fictions are needed more than ever for both social scientists and lay readers alike. Let our imagination take hold, and be in touch with our emotion via someone else’s writing!

3 thoughts on “Why Reading Novels?”