In the previous blog post with the title We are All Public Scholars Now,  I argued that most sociologists have agreed that doing public sociology is desirable, and that the Internet has significantly lowered barriers to entry to disseminate scholar work, and to voice their expert opinion. Furthermore, I raised various issues that are associated with Twitter as a platform to engage with the publics. Twitter offers instantaneous access to public debates, but scholars can also get into polarized debates because of social network effect. In this blog post, I would like to focus on another platform where sociologists can also engage in public sociology: Podcast.

The five main ways that I have seen scholars engage with the public, and disseminate their work are as follows:

Among those five categories, the first two are “conventional.”  Scholars have given public lectures, and talked to traditional media since the inception of the university as an institution. Increasingly I have seen that scholars write more popular books than academic books to engage with well-read audience who are not necessarily academic-oriented. Even when writing scholarly books, they try to eliminate academic language such as “As XYZ writes,” or “XYZ argues.” They try to stay away from those rigid academic language that does not flow in a normal conversation. For example, Richard Ocejo in his latest book Master of Craft, tried to “break the frame of writing academically,” and avoid “the academic shorthand.” These practices challenged him “to explain our concepts in other language and not rely on what we take for granted” (Scholars’ Conversation: Richard Ocejo).  Increasingly it has become blurring between scholar writing and popular/creative non-fiction writing. This shows that scholars have incorporated the idea of public-facing sociology into their knowledge production process.

The next three categories among the five categories only started with the rise of the Internet. Blogging has been a popular form to engage with the blogsphere. Increasingly more scholars start to use Twitter as a place to disseminate their work. Because scholars have used the first two ways to engage with their various publics, there has been an established protocol about how to disseminate their work via these routes. A scholar needs some credentials, which establish that they are an expert in certain field. Besides, there are various gatekeepers such as TV managers, anchors, and other network personnel that could facilitate or prevent a scholar to disseminate their work and engage with the public. With the rise of the Internet, and the decreasing barriers to entry to various platforms such as blog, social media, and podcast, scholars can now disseminate their work quickly, and cost-effectively.  They can avoid the middleman problem, and totally stay away from institutional gatekeepers that sometimes might not want them to voice their opinion. 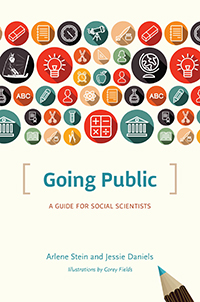 Sociologists Arlene Stein and Jessie Daniels in their book Going Public gave a timely advice to social scientists about how to be more of a public scholar, engaging with different publics using digital technologies. In the book, they emphasize that writing concisely, clearly, and not using jargon is the foremost important requirement for a scientist to engage with the public. Then they explore various digital technologies, and how they change the way scholars are doing their work. They give detailed descriptions of how to start and maintain a scholarly blog, or a Twitter account, and whether Facebook is a problematic platform to maintain scholarly presence. However, they do not mention anything about podcast as a communication tool to engage with the wider audience. This book is telling. Social scientists have written blog posts, written for the New York Times, yet few of them maintain a podcast where they could directly communicate with the wider audience. Why don’t we embrace this particular medium?

One reason has to do with the time cost of maintaining a well-run podcast. It takes a lot of time, and work to create and maintain a podcast. Even though social scientists have not come out and talk about their burnout problem as much as physicians do, they are nevertheless burdened with lots of administrative work on top of their heavy teaching load, and doing research. Maintaining a podcast? No thank you very much. Just the idea of starting a podcast, and making sure that people are listening to the podcast, and that it runs well is overwhelming to any busy scholar.

However, there are some good sociology podcasts out there such as the Annex, or Thinking Allowed. Both of these podcasts are exceptionally well-run by veteran sociologists in the English speaking world. I have written a review of the two podcasts on this blog about a year ago, and one can find out more about it here. SozioPod from Germany also does such a great job in bridging the communication gap between social scientists and the publics about social issues in the German speaking world. Those examples show that other than cost/benefit reason, there must be another reason that podcasting is a difficult market to crack for social scientists. It could be inherent to graduate school training that we all receive.

When writing a blog post, for the New York Times, a popular book, or simply tweeting, the main skill that one needs is to be able to communicate effectively in the written forms. In contrast, podcasts require a completely different skills set: story telling, conversational reaction with the host, some humor. In other words, the podcasting repertoire is completely different from the scholarly repertoire. In order to become a good scholar, one needs to think and write mostly. Even though teaching is a part of a professor’s work, it is not the main criterion where one’s evaluated as a scholar. The image of a socially awkward professor still comes to mind when one thinks about a serious scholar. Most of us are introverts who read more than playing with our peers outside during our childhood. During our grad school training, we become even more introverted because of the solitary nature of our work. Podcasting requires more than just knowledge. One needs to step outside of one’s comfortable introvert zone to talk to the audience, and to maintain that long-term connection.

In a nutshell, one does not get trained to become a good podcaster in grad school. This explains why most scientists have chosen to become public scholars on platforms such as blogs, and social media. There is “a skill consonance” between being a scholar and being able to maneuver those platforms. While there is “a skill dissonance” between being a scholar and being a good podcaster.  Therefore, even though the cost to enter the podcasting world has significantly reduced, scholars still have not moved into this space with a rapid number to engage with the wider audience.